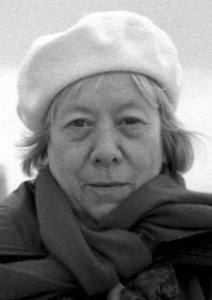 The daughter of Bohemian artists, Benveniste was born into the creative community of writers, artists, potters and actors in Newlyn, Cornwall; she helped to establish organic farming communities and market gardening while absorbing the Cornish landscapes and famous light that was to later be part of her inspiration as an artist.
Benveniste was a contemporary of the artist Patrick Heron; they knew each other in childhood when their fathers – Tom Heron and Alec Walker – collaborated in the creative project of Crysede. This business produced high quality, wood-block, hand-printed designs on fine silk textiles and garments which sold in the successful 28 Crysede shops across England for over a decade. Walker was the artist and Tom Heron the businessman.

In one sense therefore, Benveniste’s rugs project was a return to her roots, in the textile aspect of her father’s art, inspiring her to design ‘English Garden’, ‘Magic’, ‘Near & Far’ and ‘Three Wheels’ among many others. Colour was a life-long ally in her search for what she described as ‘nature’s signature’.

Landscapes from Cornwall to Mexico, from Norfolk to Tunisia inspired her to lay down an ever growing matrix of interconnecting themes to illustrate the continuing cycle of birth, growth, decay, death and re-birth in the natural world.

Granite rocks, woodland, crop rotation, the coastline, breakwaters, fishing boats, local fields, parched desert, mountains and streams – these would all play their part in inspiring her largely abstract work, with reviewers making connections between her paintings and those of Paul Klee and Wassily Kandinsky. Klee’s ‘thinking eye’ has been used more than once as a helpful way to describe her ways of seeing, and her subsequent delivery to canvas, paper, etching plate or film. Her rug design ‘Receptive’ has resonances with the Bauhaus school of art.

All this and more can be found in Benveniste’s rug designs, now hand-knotted and crafted by weavers in the Kathmandu Valley of Nepal, a region of the world whose cultures echo the wide-ranging path of enquiry and disciplined work output of the artist. 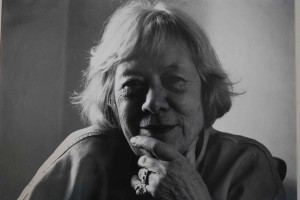 The rug designs in Gallery Two Brush Strokes have their origins in the bold black and white canvases, a memorable period of work in the 1960s, using black acrylic paints and crushed bamboo sticks for brushes.

Benveniste exhibited widely over the years and her paintings, etchings and rug designs sold well over the six decades of her career. Her 16mm colour films of artists such as John Latham working in the streets of London were later shown at Tate Britain in the retrospective 1960s exhibition, ‘This Was Tomorrow’, as well as on BBCTV and Channel 4.

Benveniste was a modernist in all senses of the word. Writing shortly before her death she said ‘It is the creative energy of ‘the doing’ that has the value; the finished object is the manifestation of this energy and that is how it acquires a value.’

Given the male ‘domination’ of fine art in Britain (and elsewhere) immediately after the Second World War, she was then all the more singular within her generation in committing herself to being a full time artist; history tells us the price that all artists pay for their singular purpose is visited more painfully upon women artists and this was no less true for her. You have to have a great deal of self-belief and discipline to get up every day and try and create something new.

In the Land Rugs designs of all 4 Galleries – One, Two, Three and Four – there are highly accomplished works by Benveniste where the form and composition closely matches the work of her (male and female) modernist contemporaries, exemplifying a search for some existential truth about our relationship to colour, nature and landscapes.